My 7 year old grand daughter came to visit a few days ago and will be here 3 weeks and my daily paintings just aren't happening. I'll do what I can, but now my painting and postings will be on the back burner. 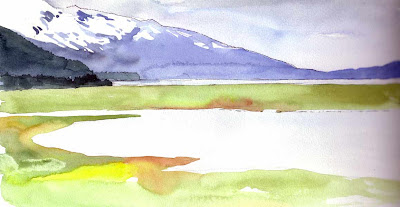 I was cleaning up my folder of scans and found this that I did on a dentist trip to Juneau last month and hadn't posted.... on a walk with friends on the wetlands trail near the airport.
Posted by Carole Baker 1 comment:

I'll probably never get the habit of posting everyday. I do try though. My postcards drawn on Wednesday and Thursday didn't get painted until this morning. 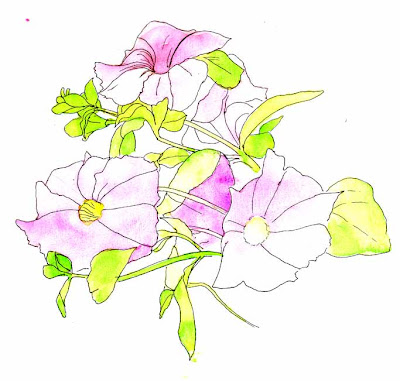 YeeGads! I didn't rotate the scan.... I'll fix it later.
Petunias on the sunporch Wednesday evening. 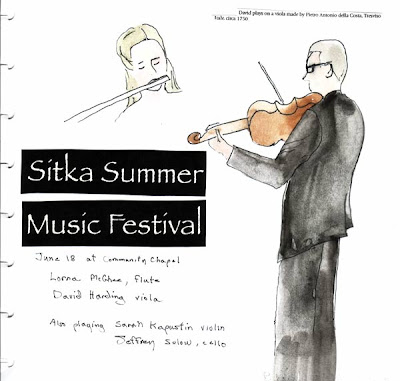 No, I wasn't in Sitka. Thanks to effort by local music lovers (Thanks especially to Sandy and George) our little town is so lucky to have some of the musicians come here most every summer for a concert. They are always fabulous. You can read about the festival here. 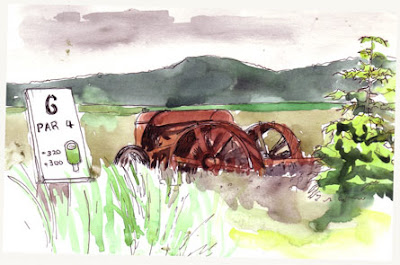 Yesterday I stopped at the golf coarse on my way back from walking to the end of the dock from 4-corners with Annie and JoAnn. This is one of several old farm relics on the coarse.

And speaking of the dock.... yesterday ground breaking took place for the building of the new one. Rumor had it that Sarah Palin was coming.
Posted by Carole Baker No comments:

ANOTHER MORNING AT THE BEACH

Down to the beach on my bike this morning and set on the nice new bench and just gazed at the calm waters of Icy Strait for a while before getting out my paper, as there were a few drops of rain. I watched a lone kayaker come from the river and cross my view. It surely must had been my neighbor Bonnie who was to begin a 3 week solo trip this morning down the coast to Sitka. She came over last night to put things in my freezer (she lives without electricity) and though she is a very experienced paddler and camper I became a bit worried when she said she didn't have any bear spray, so I gave her mine.... she will be camping in major brown bear country. 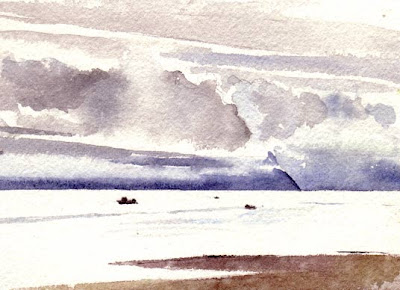 The rain stopped and I painted the view across Icy Strait..... the little speck between the 2 other boats (a fish charter boat and a zodiac) is Bonnie. 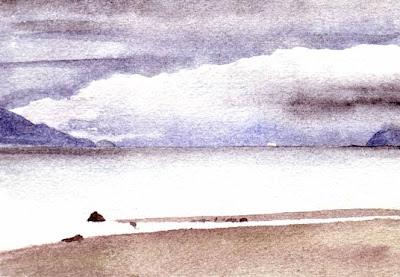 West towards the passes was a hugh cruise ship.... a few pass by every day in the summer on their way in and out of Glacier Bay..... little cities on the horizons. 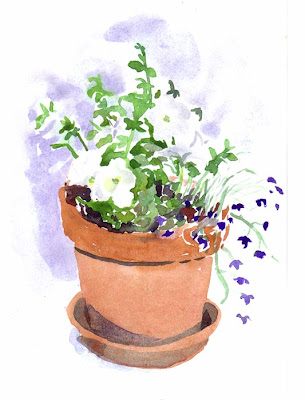 The rain has begun... a steady drizzle all day. I worked at the Community Chest in the morning and on a woodblock print in the afternoon. Almost forgot to paint a postcard. It was warm on my sun porch at 8pm and I went out and did this quick sketch of petunias and lobelia.
Posted by Carole Baker No comments:

SATURDAY AND SUNDAY POSTCARDS AND SCETCHERCISE 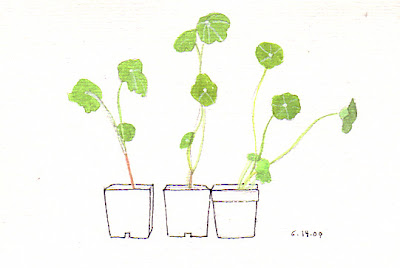 Yesterday, I opened my gallery for the first time this year .... also mowed the lawn and worked in the garden a little..... there had finally been some rain Friday night. I was planning to go out and paint yesterday evening, started out a couple of times and it started sprinkling before I got to my bike both times, but it never did much. I painted these nasturtiums that need to be put in the garden but are still on the sun porch on a piece of hemp watercolor paper.... I don't recommend the paper. 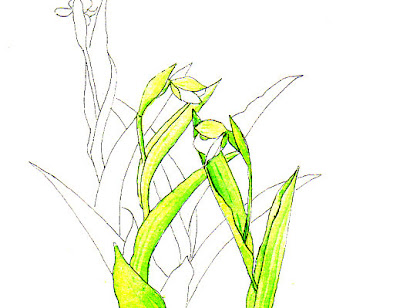 I painted this at the beach this morning. There are 2 large clumps of these Northern Lady's slipper plants near the Yellow one that I sketched on Friday. Another overcast day, but no more rain.

I'm making an effort to combine my walking and biking with my daily paintings.. I read about the Sketchercise internet group on Katherine Tyrrell's blog Making a Mark, and applied to join it, as it seemed to be a small group where I could share what I love to do. I was very disappointed when I was not accepted to the group and also a bit perplexed.... acceptance was decided by what appeared on this blog and mine "missed the exercise element." Granted, I haven't been combining the 2 very much in the last month or so, but I have been walking and riding my bike for many miles every week as I always do when weather permits, and while in Cedar Key for most of 2 months, I walked practically every day for at least an hour, and on many of those days walked to where I painted and brought home plants which I painted.... not every thing I've sketched is on this blog. I've taken my sketchbook and used it walking, hiking, biking, and kayaking for years.

Anyway, Katherine started another Sketchercise group on Flickr for wannabees which I joined. I don't know how Flickr groups work and have to put in some time to figure out how to post pictures. I do often get lazy and don't want to walk or ride my bike, especially when its raining or snowing, so hopefully this group will help me get out there and exercise more often.
Posted by Carole Baker No comments:

I'm back to daily painting! At least for 3 days. 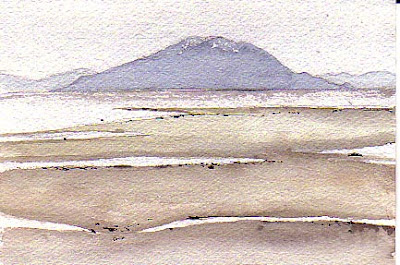 Wednesday, I rode my bike to the beach and sat in the bench that appeared this spring west of the dock. About a dozen eagles were hanging out on the tide flats as well as some crows, at least 2 of which were in the trees behind me, squalking while I sketched. This is one of 2 little postcards.... the other had birds but they didn't look much like birds, so you only get to see this one. It was overcast, but the sun came out later in the day.

Yesterday, after a busy day working on my gallery and some studio painting, I had about an hour before I had to start getting ready to go to a dinner party and biked to the beach again, thinking I'd do another painting of the same as Wednesday, but in the sun and with the tide in. But the wind was blowing too hard to sit on the bench and I decided to walk over to see if the lady slipper was open and it was..... earlier than usual this year, I think. 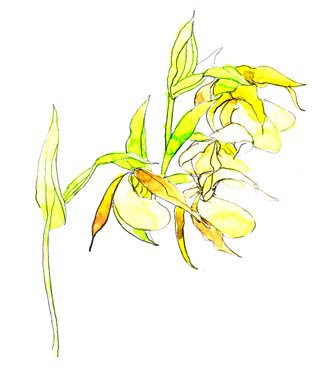 I didn't count the blossoms, but there were a lot more than what I had time to draw and paint in 20 minutes. Could have painted a little longer as I got home faster than I did getting there with the wind on my back.

Overcast today, finally a little rain last night, the first in almost 2 weeks. I decided to put some time in on the garden. I've been putting off transplanting my cabbages and brocolli from the A-frame until it started raining. The ground is still dry as a bone, but did it anyway. It will probably get seriously wet tomorrow..... just in time for the farmers market and rhubarb festival tomorrow.

I worked in the studio this afternoon on this rhubarb..... had thought I might do some little rhubarb paintings and take to sell tomorrow at the market, but couldn't do anything fast. 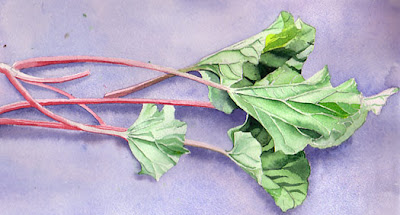 This took most of the afternoon having started it yesterday, and its still not done. I tried to do a quick sketch yesterday, but the leaves wilt so fast. I took some photos, one of which I did this from. Its about 14 inches wide, too big for the scanner and cropped some..... should be on my other blog, and maybe will be when it's finished.
Posted by Carole Baker No comments:

Time keeps passing and I haven't posted here for almost a month. And as you might have guessed, I haven't been doing my daily paintings either. Other things took priority for a while and then inertia set in.... enough said. I'm ready to start anew. 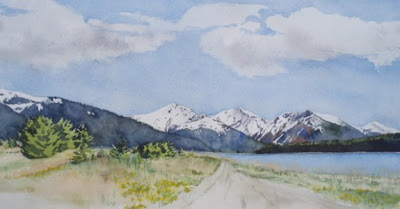 We've had gorgeous weather for most of the time since coming home from Florida. This is a larger picture that I painted last month down at the beach..... I paint this view just about every year.
Posted by Carole Baker No comments:

I am an artist living in a small community in SE Alaska. This is where I have posted small paintings and drawings off and on since 2006.