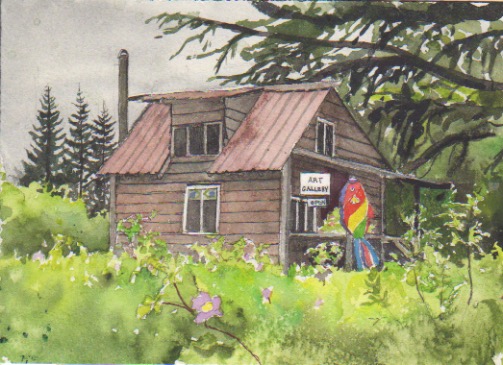 The Little Gallery is open for the summer after being closed for the last two years.   I have lots of new paintings  on display as well as my cards, older woodblock prints and paintings, and a few antiques and collectables.  Most of my newer work is in oil.

These wide-angle photos make the rooms look larger than they actually are.

Another walk to the middle beach on May 15  and it didn't rain, so I finished this one on site.  I haven't been painting much, at least not successfully.  I try to think of the failures as a success in learning how not to do things, but lately it is getting discouraging.

May Fifth at the Beach

It was a lovely day when I painted this at the beach. So many new spruce!
Posted by Carole Baker No comments:

I began this on Sunday when I walked to Middle Beach, but had to stop when rain drops started hitting my painting. I finished with a photograph yesterday morning.  I had moved the tree in the middle over to the right when I sketched, but forgot I wanted it there and copied it where it was in the photo.  I love the colors of sweet gale and equisetum this time of year.
Posted by Carole Baker No comments:

Saturday at the Beach

Spring is slow coming here, with not many nice days.  At least the snow is going away with the rainy days.  Saturday afternoon was lovely and I spent a couple of hours walking and painting at the beach.  Over the winter, thankfully, the beach and upland meadows have been closed to vehicles. I'll be spending more time there as the warmer weather comes.
This is my favorite spruce which somehow has been saved from being pruned by the spruce tip pickers.  Each year, I'm amazed by the growth of the small trees.  As the rebound continues, a forest is beginning.
Posted by Carole Baker 2 comments:

We made plans in December to go to Florida at the end of Feb. for a couple of months, considered cancelling because of the virus, but went anyway so I could have cataract surgery.  And I did, just in time before the doctor stopped surgeries.  I'm seeing colors a lot more vividly, everything is way brighter and my distance vision is amazingly better.  I'm now having trouble finishing a couple of paintings started before the surgery...values are off from what I remember.

We flew home on March 26 and have been on strict quarantine ever since and will stay that way for however long it takes.

These are the few little paintings I did while there, and all but the next one were done before surgery on either eye.  This one was done after the first eye.

This is a pond behind my brother's house where we stayed most of the time.  I've painted it several times on other trips, but the fountain is new to the scene.
This is also next to the pond.

And this is Bok Tower Gardens in Lake Wales, a favorite place.

We made a short trip to Cedar Key where I painted the oak tree at the top of the post and attempted to paint scrub pines without success.  I remember trying to draw them when I was a kid.  I tried to draw every needle.

One of three little sky studies from my studio around 1pm.  The sun showed it face a few times today, but now it is snowing.
Posted by Carole Baker 2 comments:


Posting on this blog had become a routine last year, but faded away soon after my bilateral knee replacement on May 1.... no, actually it dwindled before when my challenge of a year of a watercolor painting everyday pretty much fizzled in January and and did stop in February.  Soon after my surgery my dear husband, Van. had a couple of major medical issues happen, one after the other. We've both made numerous trips to Seattle, Anchorage, and Juneau clinics and hospitals...I can count ten between the two of us, most of which we went together.


My long anticipated art show at the Juneau Arts and Humanities Council Gallery in Juneau happened in July.  That entailed lots of framing, taking all my paintings to Juneau in my car  on the ferry, hanging it for the opening on July 4, and staying in Juneau for a week to get the ferry home. then another trip on the ferry to take it down at the end of the month.  Then the ferry workers went on strike while I was there and I had to fly home and go back to Juneau one more time and get my car and bring it home after the strike was settled.  I was thankful to have friends Aimee and Artemis and Van's help. With  all the hassle I was happy to have my paintings seen, sold a few, and left some in the gallery there.  And I enjoyed seeing many of my Juneau friends and meeting new patrons.

I managed to get outside with friends and do a few watercolors.  these are three that are presentable.


Earlier in the year, I had booked a 3 week tour of China for November with a friend  that I almost cancelled several times, but Van insisted that I go as he was recovering.  So I went, and it was an amazing trip.  Much of the trip was in cities which were huge.   I loved the time cruising on the Yangtze River for 5 days, but most of all Guillin and the Li River.
Here are a few little paintings that I did. 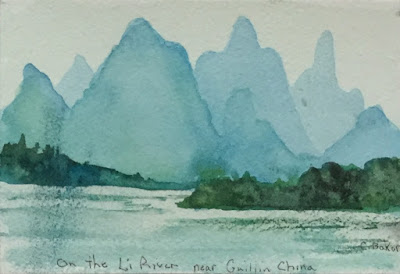 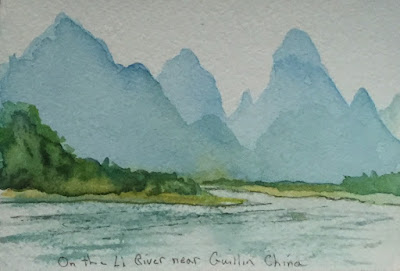 Now we have been home since the end of November and are hoping that there will be no doctor appointments for some time.

I finally have no excuse for not getting back to work in the studio, but I've finding all kind of excuses not to.  If there was a prize for procrastination, I'd be a winner. My trips downstairs to the studio are mostly followed by sorting through stuff, looking at old paintings, then piddling with my stuff some more.  Joining two session of life drawing has got me at least drawing, and just writing and posting here is giving me a feeling that  maybe I'm breaking through the inertia that had set in.  New Years usually gets me motivated and hope springs eternal.
Posted by Carole Baker 2 comments:

My Coming Show in Juneau 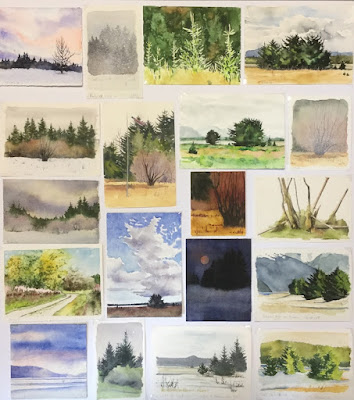 It has been an eventful and busy last couple of months and I've let other things take precedence over my daily watercolors.   I'm now preparing for a show at the Juneau Arts and Humanities Gallery for the month of July, getting things framed and hopefully a couple more oil paintings finished.

Part of my show will be many of my watercolor postcards.  Looking for some way to display them, my neighbor found nine storm window stored in her garage which make very good frames.  I was able to temporarily mount about 22 of them for each frame.  I would like to have done them chronologically but as they were different sizes and I wanted as many on a panel as possible, they aren't in order.
Posted by Carole Baker No comments:

Sadly, daily watercolors and posting on this  blog have not been priorities lately.  This first one is of an iceberg in Glacier Bay from a photo I took in 2017. 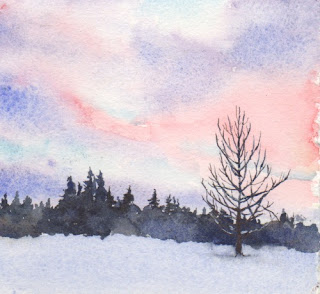 This was three nights ago from my kitchen window. 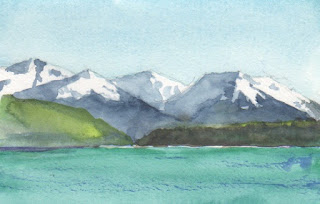 From the dock island in my car Saturday, the second. 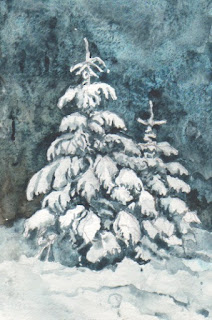 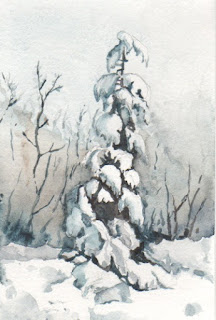 I used Daniel Smith Lunar blue paint on these last week while it was snowing from photos taken in December. 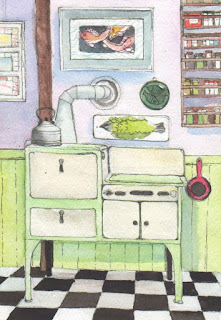 This is my funky old stove.
Posted by Carole Baker 2 comments:

Beach View from a Week Ago 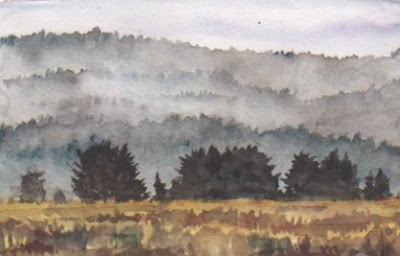 This was painted from a photo I took at the beach last Saturday and painted that afternoon.

My year of painting a little watercolor almost everyday is almost over and I've been having a hard time keeping up this last 2 months.  In fact  I've hardly done more than two or three a week for the last few month. I have done several sketches for a tshirt design for a fund raiser and am still struggling with that, and have made progress on a couple of large oils. January is usually a productive month, but not this one.


Posted by Carole Baker No comments: 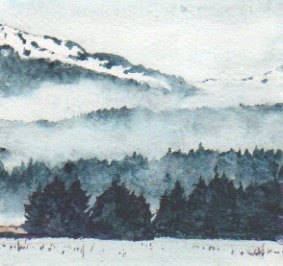 View from the ferry coming in to dock in Gustavus on Monday. 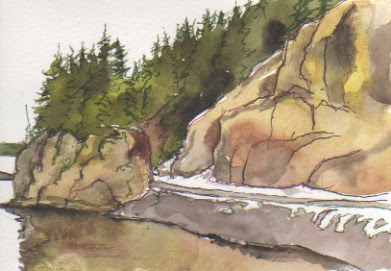 The view from the ferry terminal on Monday. 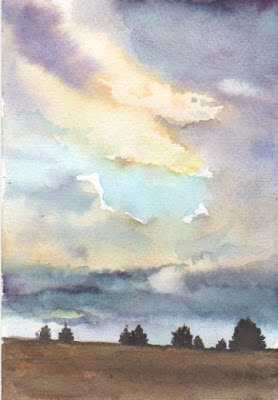 From a photo taken in Novemeber
Posted by Carole Baker 2 comments: 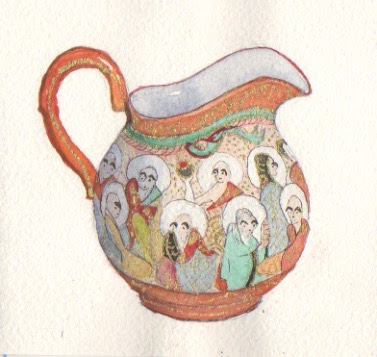 These are some more cream pitchers and I have six more from friends yet to paint. This  one is part of a set inherited from my husbands family.  Its been in a cabinet for 40 years.  I used part of the set it in at least one still life painting, previously. 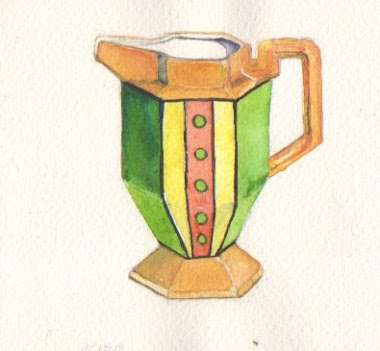 This is one of my favorites, at least now. 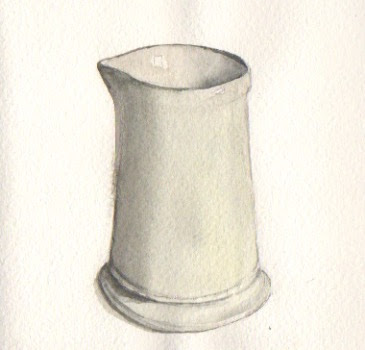 Another find at the local second-hand store and it will go back soon. 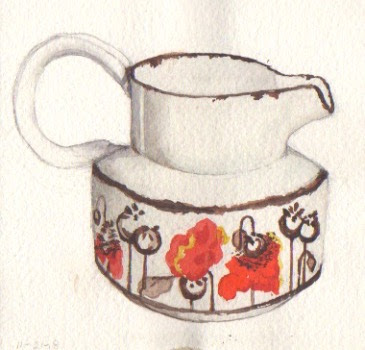 This one is part of the set of dishes I use most days.  I told my aunt many times how much I like the set and she gave them to me when she moved into a condo.

I'm in Juneau for most of a week and haven't had much chance to paint.... medical appointments, shopping and dealing with lots of snow.   On the ferry ride here on Wednesday, I planned to paint and saw the most spectacular sunset, but Lynn Canal was so rough, I was close to nausea.
Posted by Carole Baker No comments: 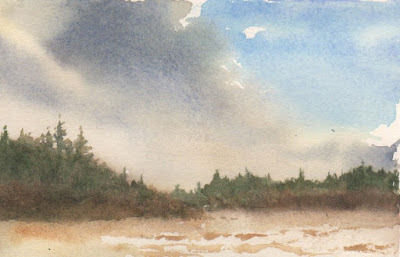 I've been remiss the last couple of weeks, not doing my watercolors everyday and not even putting the dates on when I have done them.  I'm pretty sure this one was on December 30th. 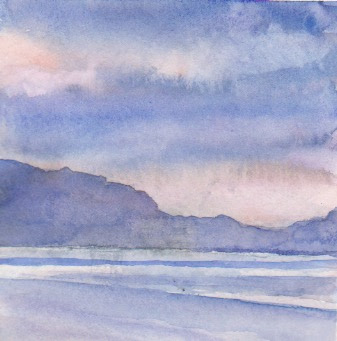 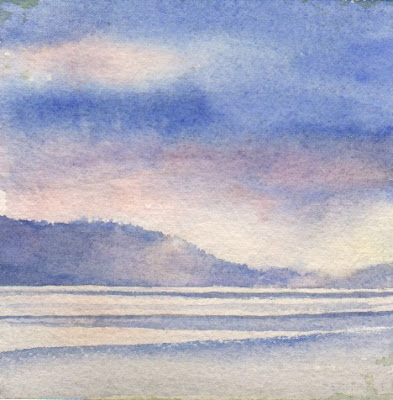 I think I did these two on New Years from a photo.  I also did an oil from it which I wiped out. 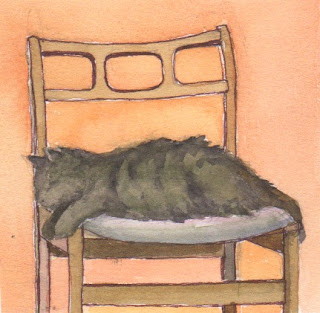 This is Gus who is 13 years old and loved by Kathy and Cheryl.  I painted him in his home a few weeks ago and made him look more like a cat more recently.....he looked like a blob before.

This was the sky one morning around New Years. 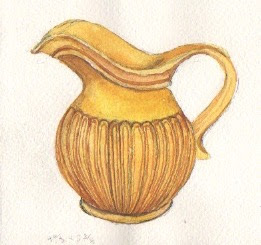 These are some more cream pitchers that I've painted in the last month.   This one was borrowed from a friend, as well as the second and forth one. 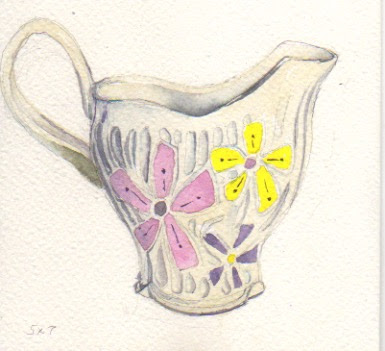 This was made by local potter, Kim Ney. 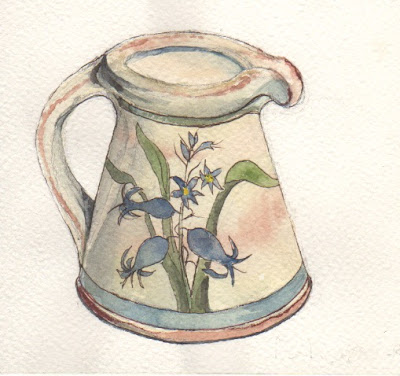 I bought this one in England many years ago at an outdoor market.  It is signed with an "NC" below the handle. 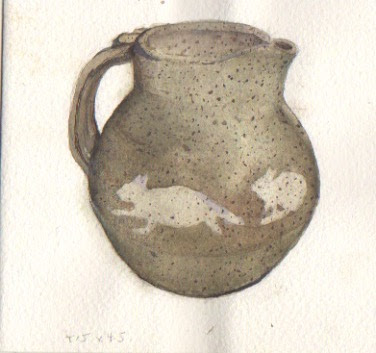 This was made by the late Liz Berry who lived in Fairbanks, Alaska. 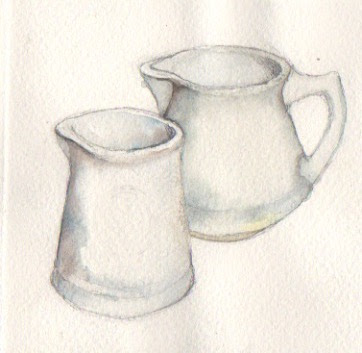 These, I found at the local second hand store.
Posted by Carole Baker 2 comments:

I am an artist living in a small community in SE Alaska. This is where I have posted small paintings and drawings off and on since 2006.